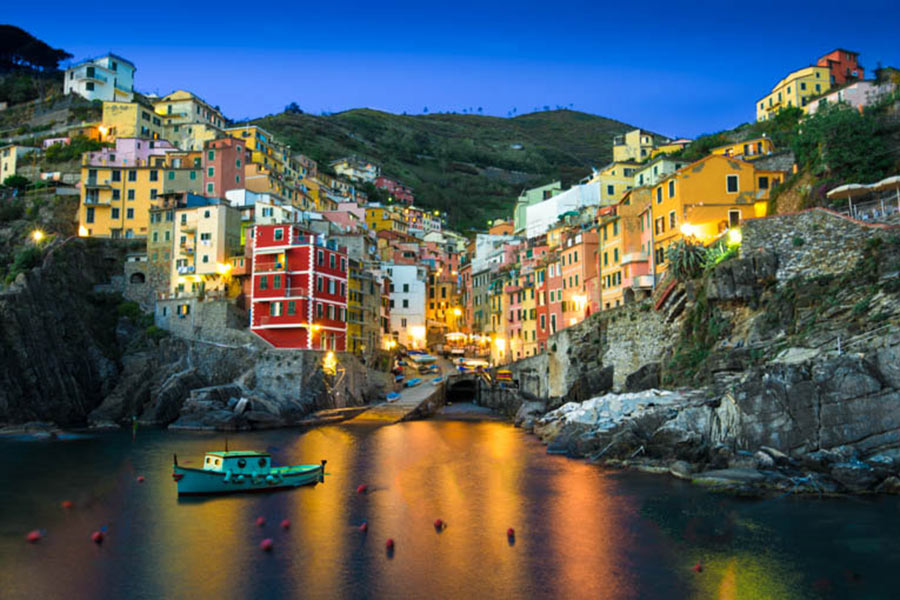 Coming from La Spezia, the first village one comes across is Riomaggiore. It was founded in the 8th Century by a group of Greeks who had survived the iconoclastic persecutions of Leone III. Afterwards, in 1276 it fell under the dominion of Genoa. The village is located on the Riomaior torrent and has a medieval type structure with tower-houses which extend themselves more in height than in width and which are organised in parallel ranks, with intervals of an infinite number of coming and going alleys. The church of Saint John Baptist (San Giovanni Battista), which was built by the Bishop of Luni, belongs to this “landscape”. Further down, there is the oratorio dei Disciplinati that dates back to the XVI century and the cemetery, located where once there was an old castle built between the XV and XVI century. The economy of the village has changed over the last years. In fact, the village, even though maintaining its own traditions, has affirmed itself as a tourist centre of high standard. Amongst the different attractions which can be found, we remind you above all of the Via dell’Amore – the Path of Love. It is a path that winds along the coast, above the sea, offering an unforgettable panorama and connecting the village to Manarola. The path was dug in the hard rocks and runs close to the sea on which it leans out. Along the way, you can see various types of vegetation such as agaves, Indian fig, vanilla plant, rue and many others.

Get road information starting from:

Il Saraceno is a Hotel situated in Riomaggiore, Five Lands area in Liguria.

Due Gemelli is a Hotel situated in Riomaggiore, Five Lands area in Liguria.

Villa Argentina is a Hotel situated in Riomaggiore, Five Lands area in Liguria.